Cost of Removing a Chimney Stack

If you're trying to find out how much it costs to remove a chimney stack then you're in the right place. Here we discuss removal prices for different chimney stacks making it easy for any homeowner to calculate how much their job will cost. 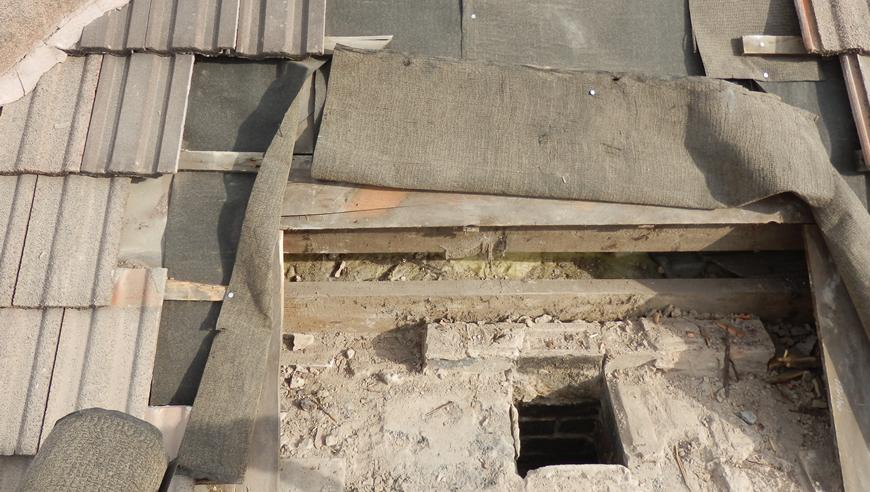 How Much to Remove a Chimney Stack?

The average cost for chimney stack removal is usually in the range of £900-£1200 depending upon the size of the chimney and whether or not scaffolding will be needed.

Roofers normally work in pairs and charge around £250-£300 per day. Removing a chimney stack shouldn't take much longer than a day and if it's a small-medium sized chimney, two roofers should be able to complete the job in half a day.

Here are a few average costs for removing a chimney stack, not including the time it takes to erect the scaffolding:

Individual costs for removing a medium-sized chimney stack positioned near the eaves of the roof - Total Cost: £1000

When people talk about removing a chimney, they are often referring to a chimney stack rather than the complete chimney. The chimney stack is the part of the chimney that sticks up above the roof. Therefore, a quote for chimney removal does not normally include removing the chimney breast or the hearth (if you do wish to remove the entire chimney the costs would be considerably higher). In this article we are simply considering the removal of the chimney above the roofline and then tiling the roof over.

Any additional work over and above this would need a separate quote. The most common reason to remove a chimney stack is if the chimney is in a state of disrepair, as often it will cost more to repair than it would to simply remove it. In addition, the need for chimneys has reduced significantly thanks to the prevalence of gas central heating.

While you have scaffold erected for roof access, it makes sense to have any other roofing work carried out, so any roof tiles that need replacing or repairs to the fascia/roofline could be carried out at a reduced cost. At the very least have your roof inspected and checked for any damage at the same time.

A typical chimney stack removal job would mean the hiring of scaffold, the removal of all cement flaunching and chimney cowls/pots, dismantling and removal of all bricks to the ground, then the supply and install of new roofing felt, timber and roofing tiles. Finally, the disposal of all waste material will be required, which may involve skip hire if the chimney stack is large. Depending on the age and design of your chimney, you may be able to sell some of the items such as clay chimney cowls and pots can to a reclaim yard or roofer's merchants.

Second hand Victorian bricks can be worth as much as 50p each, so you can potentially save a lot of money if you sell them on. If you have leadwork around the chimney this can also be weighed in at a metal recycling yard for cash, effectively reducing the overall cost.

Removing a chimney stack is not normally a DIY job, there is much to go wrong with this task and damage can easily be caused to the roof structure which can be dangerous and potentially cost a lot of money to put right. A bodged chimney stack removal can cause ventilation and condensation problems along with actual structural problems. Working without a scaffold tower can be extremely dangerous so if considering DIY at least ensure you follow safety precautions. A scaffold tower will typically cost around £300.

If you are determined to go the DIY route, you will still need to take professional advice regarding the structure and to liaise with Building Control, so there will be fees to be paid in any case. So even doing the job on a DIY basis you will still have scaffolding and professional fees to pay - then of course you need to factor in the tools and materials required plus the cost of your time. Once the many factors have been considered, it's no surprise that chimney stack removal is a job most often left to professionals!

How much will it cost to remove a chimney stack?

The cost can vary depending on a number of different factors, but if we assume that there are no access problems or obstructions preventing access via conventional scaffolding (such as conservatories or narrow alleyways) and that the chimney stack itself is not exceptionally large and the roof tiles are readily available with the chimney being entirely on your property. Then a typical quote would be around £1200.

However, you can get away with minor repairs rather than removing the entire chimney stack in some cases. For example, repointing the stack by removing any loose crumbling cement from the brick courses and re-pointing with a new sand/cement mixture may be sufficient. If it is just the lead flashing causing leaks, then this too can be repaired or replaced. If you simply do not need the chimney any more due to having gas central heating fitted, then you could also consider having the chimney capped if no longer in use.

This will prevent rainwater from getting into the chimney but will allow it to breath and prevent condensation problems. But if the chimney stack is in a really bad state, then removal is usually the cheaper option. If a high chimney over 2 metres above the roof level, then add on as much as £500 to cover additional scaffolding costs to wrap around the chimney for safe removal.

How Long Will the Work Take?

A small chimney stack (protruding up to 2m above the roof tiles) will usually take two people around half a day to remove, and a large chimney will take a full day. This does not include the time it takes to erect then dismantle the scaffold required for access as this is usually done by a different company. This of course assumes no access problems and no steelwork required for structural reasons.

Do I need planning permission to remove a chimney?

Removing a chimney, even just the stack, is a major structural change which will often require guidance or clarification from a structural engineer, steel supports and/or brackets may be required. In addition, you should contact local authorities and building control departments to clear your work before starting the job. If a semi-detached or terraced house, you also need to take into account any party wall agreements.

You should always ensure you have full permission to modify the structure of your building before commencing any work, particularly when it comes to listed buildings and conservation zones. Chimney stack removal has to comply with Building Regulations in regards to the structural strength of the building. In addition, there are fire safety and sound insulation aspects to consider, along with damp prevention and ventilation considerations.