Cost of Replacing Leadwork on Chimney

All you need to know about replacing/repairing the leadwork on a chimney including costs of materials, costs of labour and time frames. 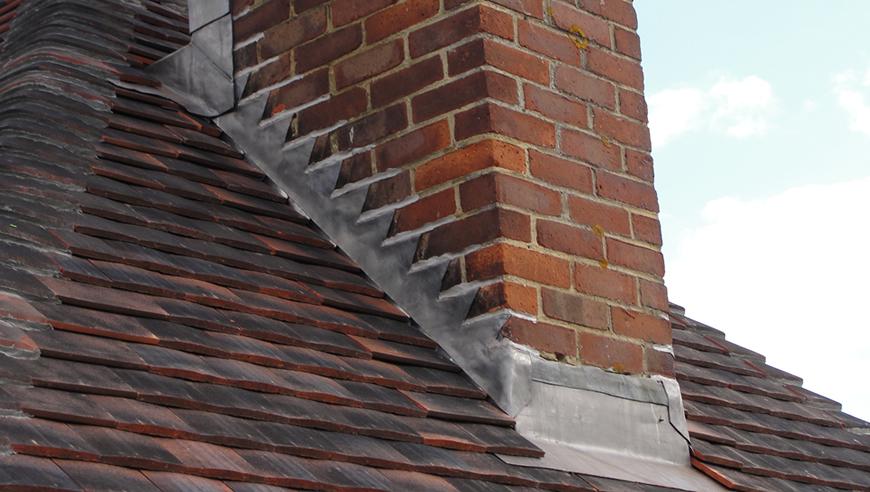 Lead is used on many areas of the house, particularly on the roof around a chimney base, where a wall meets roof tiles, or in a roof valley. One of the oldest building materials still in use today, if installed correctly, lead will outlast the building itself! However, it is expensive and will usually need to be installed by an experienced professional as opposed to a local handyman or as a DIY project.

Lead is extremely durable, so durable in fact that most issues with leadwork are caused by poor installation, with the most common problem being leadwork simply coming loose from the wall and leaving a gap for rainwater. But over time leadwork will eventually split due to the exposure to British weather. Lead comes in rolls but should never be installed in lengths over 1.5 metres, less for thin lead rolls. For long runs the lead strips should be overlapped to allow for thermal expansion and prevent splitting after just a few years.

If replacing or repairing any leadwork, you should be prepared to replace some roof tiles at the same time. Disturbing roof tiles will often lead to broken tiles so it makes sense to have some spare tiles handy before starting the job. You can also get the roofer to do a full roof inspection to check for damaged tiles or roofline products.

Lead is manufactured in 3 common thicknesses (3-5mm) but the thicker the lead the better, though obviously, thicker lead is also the most expensive! Lead can be shaped by welding or by beating. If the lead is to be shaped by beating with wooden tools then the thickest lead should be used, but for welding thinner can be used no problem. The lead is fixed to the wall by lead plugs which are wedged between the courses of bricks. Then cement is used to fill any gaps and prevent water penetration. The three main different types of leadwork are a lead apron, step cover flashing and a lead back box on a chimney.

Lead apron flashing is the easiest job but step flashing is much more difficult as it requires cutting in angles to match the slope of the roof. Replacing a chimney back box can be difficult and expensive as it often involves removing lots of tiles. But the most expensive part of any lead replacement job is the cost of the lead itself, closely followed by the access up to the roof which often involves scaffolding.

The most common problem with replacing lead flashing is damage to the roof tiles which need removing as part of the job, roof tiles are generally cheap but if a lot of them are damaged, particularly if they are cemented in, then this can mean substantial labour additional costs! However, the most serious problem is fires, patch repairs on lead need heat which in inexperienced hands can lead to disastrous roof fires. Lead is very heavy too, so for larger sheets do not expect to be able to move these around a roof on your own!

Cost of Replacing Leadwork on a Chimney

The average cost of replacing leadwork around a chimney is usually in the range of £350-£800 depending upon the position of the chimney, whether or not scaffolding will be needed, and whether your house is single or 2-storey.

Most roofline workers operate in pairs and will usually charge around £200-£300 per day. Usually the job will be completed within a single day, and in most cases will be only half a day so labour costs are not considerably expensive.

Here are a few average costs for replacing and repairing leadwork around a chimney:

Individual costs for replacing leadwork around a chimney with scaffolding required - Total Cost: £700

How much does it cost to replace my leadwork?

Costs will vary depending on the amount of lead required, the difficulty of the job and the access. But as a typical example, to replace all the lead around a chimney (apron, step flashing and back box), to include scaffold to a chimney which is near the edge of the roof.

The average cost will be around £600 to £800. If the chimney is located on the roof ridge, then the scaffold will cost a lot more. To just re-fix existing leadwork by raking out loose mortar to 15 metres and re-pointing, plus replacing any loose plugs as required, excluding any scaffolding fees, then you are looking at around £250-£500.

How long does lead last?

If the lead is sourced, cut and fitted correctly, then the lead should last as long as the house. However if very thin lead has been used to save money, then it may start splitting much sooner. Most of the time the lead doesn’t need to be fully replaced, usually just the cement has failed or the fixings, which has allowed the lead to simply come loose from the wall. So in most circumstances, a repair rather than replacement is required.

There are other options for flashings, but lead will last longer and age more beautifully than any cheaper substitutes, outlasting any alternative building material, making it the best value in the long run, even though at first it may appear more expensive.

How to find a good roofer to replace leadwork?

Your roof is one of the most important parts of your house, protecting the interior and the structure itself from the elements. So if your roof is in need of repairs it is vital to find a professional tradesman to carry out high quality, guaranteed work. There are a lot of options nowadays, with from national companies to local "one man band contractors" and everything in between. The last thing you want to do is hire a cowboy roofer!

Investigate contractors thoroughly before hiring them to do any work by making sure they are a licensed and insured, with the relevant accreditations and trade associations. Always ensure you get a landline telephone number and real physical address,tradesman who just supply mobile numbers are virtually untraceable. Also check they have relevant experience working with leadwork - there is no point hiring a roofer that does great work on thatched roofs if you need your leadwork replacing!

Roofers tend to specialise in certain areas so ensure their experience is relevant to the job you need doing. Finally look at examples of their previous work if possible. Companies which are happy to show you their previous work are much more likely to be genuine and dependable. Any roofer that refuses to show you previous work or provide references from previous customers should immediately set alarm bells ringing!