All you need to know about removing roof moss by yourself including costs of materials, labour and time frames. 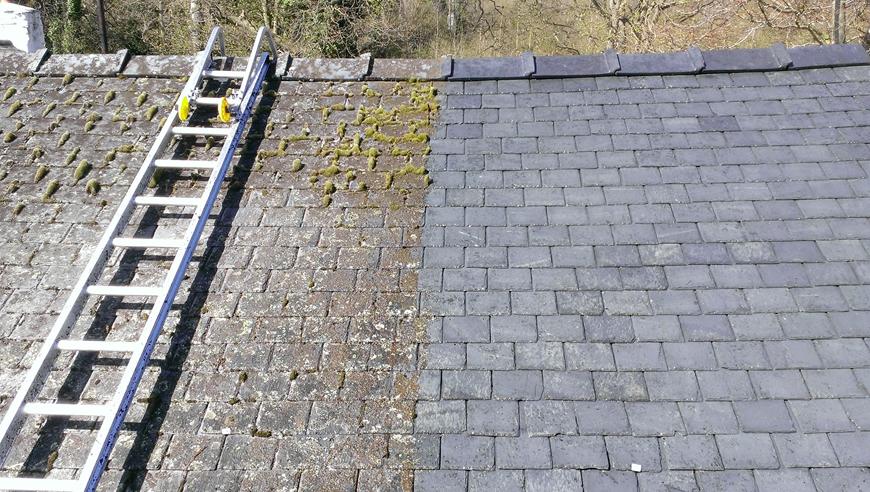 If you are you thinking about having your roof tiles jet washed to remove moss, then it may be worth considering manually removing the moss as pressure washers have been shown to damage some tiles roofs and there is also the potential risk of flooding to the loft space.

In many cases, any excess moss can be removed by manual scraping and then applying the correct chemicals to the tiles to prevent future growth. This approach doesn’t involve gallons of water so is less messy and it won’t cause a lot of damage to the roof tiles. If any individual tiles are damaged during this process they can usually be replaced cheaply in any case if all the scaffolding and roof ladders etc are already in place.

When removing moss or lichen from roof tiles and all the equipment needed to safely access the roof is already in place, it makes sense to take care of any other roofing maintenance at the same time. So if any other roof related items need repairing or replacing, such as roof or ridge tiles, fascia or soffit boards, guttering or lead flashing - get it all done at the same time.

No approvals from the local authority are required to manually clean moss from roof tile, so this can be done as a DIY project, but you do need to ensure all the necessary safety equipment is in place to prevent injury. For the DIY guy this would normally involve the hiring of safety roof ladders and/or scaffolding, which means there will often be little, if any, savings compared to hiring a professional roofing contractor.

So even though this can be done on a DIY basis, this and other jobs involving working at height are best left to the professionals, as even the hiring of all the necessary safety equipment, is no real substitute for the good judgement and common sense that comes from years of experience working on roofs.

With any jobs that involve disturbing roof tiles, expect that you will break some of them, no matter how careful you are, these things happen! If you do not have spare matching tiles to hand, this will involve rushing around DIY stores and builders merchants at the last minute, avoid the hassle by having some spare tiles ready (including ridge tiles) before you begin.

You should also note that the new building regulations require all tiles to be nailed or otherwise mechanically fixed to the roof, but this only changed in 2015, roofs prior to that would typically only have every third row mechanically fixed. The cost of replacement tiles depends on the type/specification, but standard roof tiles are pretty cheap so buying a few extra is no big deal and can save you time.

On average, assuming easy access and no tiles need replacing, the roof on a typical UK 3 bedroom semi-detached house can be cleaned manually for around £300-£500. This is usually cheaper than pressure washing, which can cost up to £750 for a typical house. Manually removing moss from a large home with attached garage and conservatory/porch etc would typically cost around £700-£1000, depending on the location and the size of the roofing company.

Roof cleaners tend to charge around £200 per day, and depending on how badly the moss has built up it can take anywhere from 2-8 hours to remove the moss and treat the roof with chemicals to prevent further build up.

Here are a few average costs for hiring someone to remove moss from your roof:

Individual costs for hiring a tradesman to remove the moss from a gable roof of a 2-storey semi-detached house with easy access - Total Cost: £400

How long will it take before the moss comes back?

Assuming that the roof isn’t under tree cover, the moss shouldn’t grow back for 3 to 4 years, so the chemicals should be re-applied every 3 years to prevent any moss growth. This application of chemicals to the roof is much cheaper than the initial cleaning as no elbow grease is required and the chemicals themselves are cheap! Plus there is no need to physically get on the roof again, the chemicals can be applied from gutter height with a sprayer.

Can't I just use chemicals to remove the moss?

The short answer is no! You would need many gallons to try this as the moss would simply soak it up. In addition thick moss will prevent the chemical from soaking into the tile and the overlaps, which means the spores would not be killed, which means they would grow back quicker. Finally all the dead moss would eventually wash down into the gutters causing blockages and this would be ongoing for months so your gutters would need frequent cleaning to avoid becoming blocked.

Will manual removal of moss damage the roof tiles?

There is always some risk of damaged tiles whenever you disturb them, especially with very old roof tiles. However manual cleaning using a scraper or brush is much less likely to damage tiles than using a high pressure washer. In fact a number of tile manufacturers specifically state that pressure washers should not be used with their products to avoid damage and manual cleaning is often their preferred option.

Should I have moss removed as soon as it appears on my roof?

Despite scary horror stories told by unscrupulous tradesman, in the vast majority of cases some moss growth on roof is not a problem. In most cases even significant moss growth will not damage the roof tiles, but it can of course block gutters and drains. On certain very shallow pitch roofs, moss can potentially reduce the flow of water and in very damp conditions the roof tiles can be damaged over time. But in most cases, the removal of moss from roofs will be for mainly cosmetic reasons.

The NFRC (National Federation of Roofing Contractors) roofing trade association have never recognised moss removal as a true roofing discipline as they believe that in most instances, moss on roof tiles is rarely a problem unless it is blocking gutters or other drainage points on the roof. In fact they say that unnecessary foot traffic due to the many roof treatments offered to remove moss often leads to roof damage in the form of cracked or broken roof tiles.

Ready to get a price?
Get a Free Estimate