The Cost to Fit a Heated Towel Rail Radiator

All you need to know about fitting a heated towel rail radiator in a bathroom including costs of materials, labour and time frames. 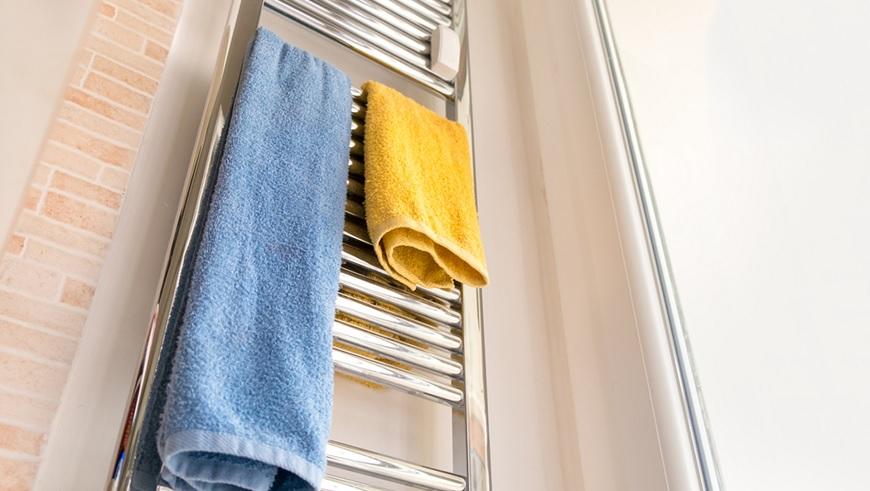 A heated towel rail radiator in your bathroom is a stylish and functional alternative to the traditional radiator. They come in a variety of designs and styles to suit your existing decor and personal preference, plus you can even fit them yourself if you have decent electrical wiring and plumbing skills (though you will need to adhere to the Electrical Wiring Regulations for special installations in bathrooms and other "wet" areas). There are two types of heated towel rails, electric towel rails are stand-alone units which simply connect your electricity supply, whereas the other type of towel radiators, the "wet" type, need to be connected to the central heating system. Both types have their one advantages and disadvantages, hopefully this article will help you decide which is better, plus offer some helpful pricing information to ensure you get a good deal if hiring a contractor to fit the heated towel rail for you.

If fitting a "wet" heated towel rail which will need connecting to the existing central heating circuit, it may be a good time to get the heating system checked and consider a getting a power flush done while the plumber is already on site. If an old radiator has to be removed before fitting the new towel rail, then this is also a great time to redecorate or tile the bathroom for easy access and a good finish.

There are 2 types of heated towel radiator/rails, electric towel rails and water filled towel radiators. You can even get heated towel rails which combine the two systems. Remember that standard towel rails donít put out a lot of heat, they are OK for drying towels, but they may not heat the bathroom properly, unless it is very small. The electric rails require proper fitting to an electrical socket in the bathroom by a competent electrician, by law. The water filled ones run off your central heating system and in most cases the heated towel rail is simply swapped with the old radiator with little to no pipe reconfiguration. Electric towel rails offer advantages in terms of being maintenance free and quiet in operation, there is also no chance of leaks! The modern direct intelligent heat technology means they are cheaper to run that you would think too.

When fitting a "wet" towel rail, always try and choose a size close to the size of the existing radiator. Otherwise the plumber may have to take up the flooring in the bathroom to connect the new heated towel rail, adding costs and inconvenience in the form of additional mess. Remember too that location has a major impact on pricing for plumbing jobs. If you live in London or the South East, the cost of living is higher so the labour rates are considerably more expensive (as much as 50% more expensive than cheaper parts of the UK like Wales and the North).

The Installation Cost of a Heated Towel Rail Radiator

Typical pricing information has been collected to help you make an informed decision when hiring a Gas Safe engineer or electrician to install and test a heated towel rail. These prices act as a good guide, but the actual cost you pay may well change depending on your location and specific requirements.

The average material cost to fit a heated towel rail radiator in a bathroom will depend on the price of the radiator you chose to install and extra costs may be incurred for things such as additional piping to install the radiator. Most towel radiators cost between £30-£150 depending on the size and finish.

The average electrician will usually charge around £150 per day in labour costs. Installing the heated towel rail will take around 2-3 hours, with extra time added on if new piping is required to replace the old. Including call out charge, expect a tradesperson to charge anywhere between £75-£150 to complete the job.

Individual costs of installing a towel radiator in a bathroom - Total Cost: £200

What is a heated towel rail/radiator?

Towel radiators are a particular type of radiator that has been specially designed to dry towels and wet clothes. They are used mainly in bathrooms, but occasionally they are installed in other rooms too. They are usually made of mild steel, stainless steel, aluminium, cast iron or brass. Towel radiators can have a shiny steel/chrome type finish, or be supplied in a range of colours to suit the bathroom decor.

Can I replace an ordinary radiator with a towel radiator?

What are the benefits of heated towel rails?

Heated towel rails dry your towels quicker than a conventional radiator, making them useful in cold climates where they help keep your bathroom hygienic (damp towels negate are a breeding ground for germs and mould). Heated towel rails can also help to save water and electricity, as the towels are dried directly on the rail and you don't need to use an energy-guzzling tumble dryer to dry them.

How do towel radiators work, how is the heat supplied?

The Cost To Install a Power Shower

The Cost to Install or Replace an Extractor Fan

The Cost to Fit a Heated Towel Radiator

The Cost to Re-Grout the Tiles in a Bathroom

Cost of Tiling or Re-Tiling a Bathroom

The Cost Of Wet Room Installation

The Cost Of Supplying & Retiling A Shower

The Cost to Replace a Toilet

The Cost of Fixing a Blocked Toilet

The Average Cost of Installing an Outside Tap

The Cost of Installing a Digital Shower