Want to find out the cost to replace your foor eaves felt?

This guide covers all you need to know about having your eaves felt replaced including costs of materials, costs of labour and time frames.

Continue to the complete guide below... 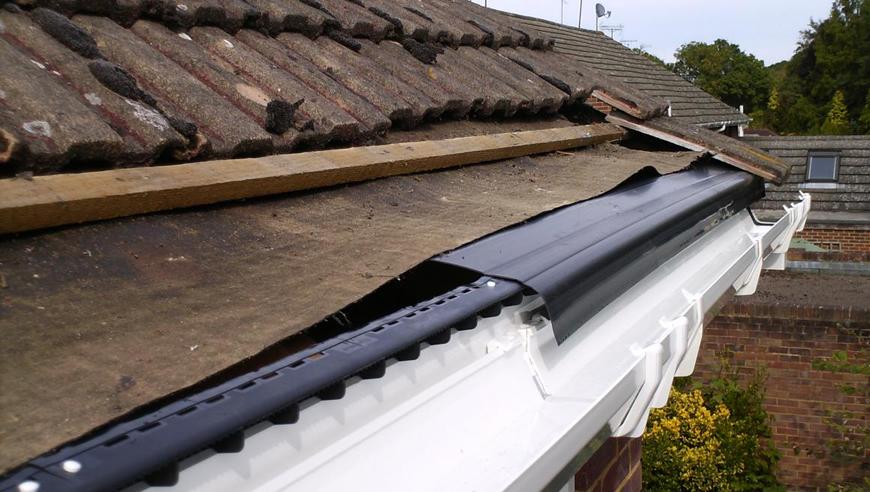 What the Job Entails

Though the traditional roofers felt is not often used these days as a more rigid protection system, an eaves tray is usually specified in conjunction with a replacement upvc roofline system instead of timber fascia and soffit boards.

The modern eaves tray is made from plastic so will effectively never rot and makes a sensible replacement for damaged or worn out bitumen based eaves felts. There main purposes of eaves felt or an eaves tray is to prevent rainwater from getting behind the guttering and rotting the fascia boards and then the roof itself.

To replace the eaves felt/tray requires erecting access equipment to roof height then removing the first course of roof tiles, then the old eaves felt is cut away a few inches above the fascia, and an eaves felt tray can be slid under the existing roofing felt, ensuring it overlaps into the guttering, then secured into place with nails into the rafters.

Replacing the eaves felt is not normally a job done on its own, usually you would only notice the eaves felt when carrying out other jobs such as replacing fascia boards or roof tiles.

If the eaves felt needs replaced, there is a high likelihood that the fascia boards will have suffered too, so this would be a good time to replace the roofline products too (fascia, soffit and bargeboard).

Without a waterproof eaves felt, the top edge of the fascia board will have absorbed a lot of water over the years due to splash back from the guttering and from any broken or missing roof tiles. The guttering will also need to be removed and refitted as part of fascia replacement, so this is an ideal time to replace it, or at least thoroughly clean the guttering before refitting.

The eaves felt is in fact normally replaced during a replacement of the roofline products, as you will need to remove at least the first row of roof tiles and cut back the existing felt to expose the roofing timber required for fitting the new fascia. You can then install an eaves vent strip to the fascia board to help stop condensation and damp from occurring in the roof space.

This can be done as a DIY project as there are no special tools required and the work is not overly technical. however, there are always risks when working at height, so do not attempt to do this job unless you are comfortable with heights and have the necessary scaffold in place.

The cost of having the eaves felt replaced will vary depending on your location. London and the South-east of England have a much higher cost of living so the labour costs will reflect this. The materials involved in replacing the eaves felt cost very little, so the labour costs will be the main factor in determining the price. It is not unusual for quotes to vary tremendously just by location alone. Eaves trays are available from many different manufacturers but most follow a similar design and all are perfectly adequate for the job.

The average cost of having your eaves felt replaced is usually around £300-£500 depending upon the ease of access and the size of your roof.

Most roofline tradesmen charge around £150-£200 per day and having the felt around your eaves replaced usually takes no longer than a day to complete.

Here are a few average costs for hiring someone to replace your eaves felt:

Individual costs for hiring a roofline worker to replace the eaves felt on your roof on a semi-detached 2-storey house with a hip roof - Total Cost: £400

How long will it take to replace the eaves felt with an eaves tray?

On a typical UK semi-detached house, with eaves at the front and rear, expect the job to take less than a full day. This includes the time to erect and dismantle scaffold towers up to gutter height. If doing the job yourself, you may be tempted to replace the eaves felt just using ladders to save money, but health & safety rules require the use of towers/platforms.

You do not have to follow these rules if a DIY job of course, but scaffold is recommended for a reason! Be wary about any roofer that is willing to do this job cheaply using ladders, better to pay slightly more and have the work done properly and professionally!

How much will it cost to replace the Eaves felt?

Quotes will vary depending on your location, the access and the length of the eaves. But if we assume a fairly typical eaves run of 16 metres on a typical semi-detached house. Then you are looking at a cost of around £400. This however assumes no access problems caused by conservatories or similar, and that you are having an eaves tray fitted instead of traditional felt, as felt may sag so often requires ply to be installed underneath to support it at the eaves.

The plastic eaves trays are easier and quicker to install, therefore cheaper. However, it would be unusual to get a quote just for the replacement of the eaves felt alone, as this job is normally part of a larger job, such as replacing roofline products.

Should I use traditional eaves felt or a plastic eaves tray?

Normal roofing felt is usually too flexible to be used at the eaves level on its own, it will usually sag behind the fascia and actually collect water. So, if you wish to use traditional felt, you would ned to have some timber fixed underneath the felt to prop it up, though this will of course involve extra work and materials. Therefore, a plastic eaves tray is normally more effective and cheaper, plus these trays are specifically manufactured for use at the eaves level.

Eaves trays are rigid so won’t flap around in the wind, plus they are more discreet when fitted than traditional felt. Plastic trays will also last much longer too, it is not unusual to find eaves felt completely rotted away when replacing fascia boards, this does not happen with the modern eaves tray, which should last as long as the house!

Have your Soffits & Fascias Painted

Cost of having your Gutters Cleaned