The Cost to Replace a TV Aerial

All you need to know about replacing a TV Aerial including costs of materials, labour and time frames. 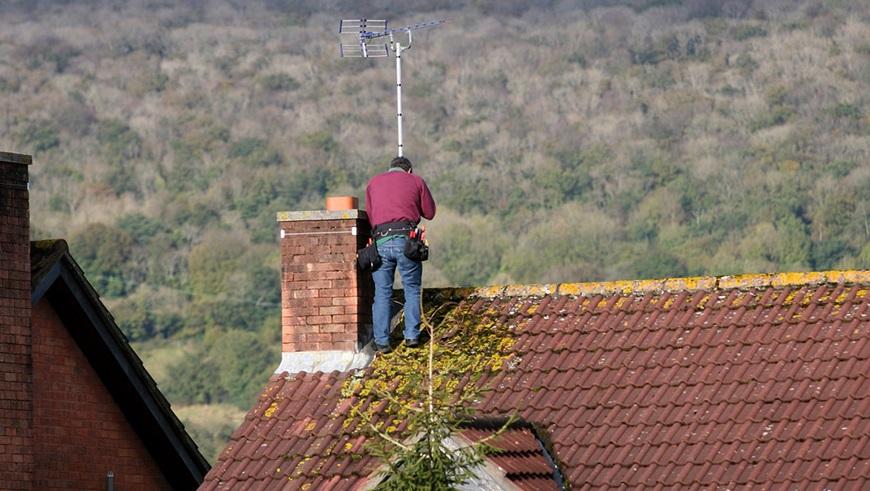 Having a poor television signal can be extremely frustrating, an inside aerial in the loft can sometimes help, but often this doesn’t work too well as the signal can be obstructed by the roof materials, nearby trees and even surrounding buildings. For best reception, having a roof aerial installed is the preferred option. Fitting a roof aerial can be a straightforward DIY project if simply replacing an aerial like for like on an existing mounting using the same cable, but sometimes it can be more challenging and will involve a new mounting as well as cabling. If you have had ongoing poor TV reception, it’s often worthwhile hiring a professional to sort out the problem once and for all. Hopefully, this article will serve as a rough guide to aerial installation and the prices given will help you make an informed decision and avoid paying too much for this relatively simple job.

If you are paying for someone to go up on your roof and scaffolding is required for access - then it makes sense to take care of all roofing jobs at the same time. Though if scaffolding is not required, your aerial fitter will probably not be able to fix the chimney stack while he is up there! But do ask him to look around and let you know about any missing tiles or crumbling mortar, so you can take care of these minor jobs before they become major jobs!

The TV aerial industry does not have a sterling reputation and is well-known for miss-selling as there is very little money to made from simply connecting a new aerial onto an existing pole. So beware of additional add-ons and up-sells. A good way to avoid paying for extras which are not required, is to check with neighbours, if they don't need higher poles and larger aerials to get a good signal, chances are you don't either! Question any installer that tries to sell you a digital aerial, as there is no such thing and your existing aerial is likely fully compatible!

If you are told you need a new /larger mounting pole, new/larger aerial and new cabling too - always question this further and make sure you get three quotes to compare. You can do this by clicking the "Get Quotes" button. The cost you will pay for a newly installed aerial will depend on several factors which could increase the cost substantially, for example your location. Just being based in London or the Home Counties could mean paying almost twice as much than those living in the North of England for the same job!

The Replacement Cost of a TV Aerial

In order to provide these cost estimates we collated typical price information from various resources, but are only a rough guide and are not designed to take the place of a written quotation. Always try and get at least three written quotes before hiring a contractor to fit a TV aerial.

The average material cost to replace a TV aerial will simply depend on the aerial itself, and any new cabling that's required from the aerial to the TV. The material cost will usually be included in the overall price.

The average specialist will usually charge around £150 to £200 for a full day's labour. Fitting an aerial shouldn't take much longer than a few hours but you should expect to pay at least a half day's work, usually around £75.

Below are some estimated costs of hiring an aerial specialist to replace or re-align a TV aerial:

How do I find a reliable and trustworthy aerial installer?

If you are sourcing a new aerial company and your neighbours or friends in the area can't offer any recommendations themselves, then ensure you use an installer that is a member of trusted trade organisation such as the Confederations of Aerial Industries. The CAI has strict codes of practice for members and offer a grievance procedure if you encounter any problems. CAI members have to use benchmarked materials and are fully insured up to £5m.

What types of TV aerials are available?

Why has my TV reception suddenly got a lot worse?

There are many possible problems, including deterioration of the cable or broken leads, the aerial orientation being disturbed by weather, LNB (Low Noise Block) problems, loose connections or electrical and radio interference. Even heavy rain or snow can temporarily affect reception.

I have just bought a brand new digital TV, do I need a new aerial?

Probably not, we recommend that you first try your new TV with the existing aerial set up, it may well be fine.

Can't I just put the TV aerial in the loft myself and save money?

If the TV signal is really strong in your area, then yes, probably. But obviously an aerial outside on a mast, on the roof, is going to pick up a better signal. So a professional installation on the roof is always going to be better, but could always try an aerial in the loft first, it may be perfectly fine.

Can I have more than one lead coming from my aerial to multiple TV sockets?

Yes. Your TV aerial can be wired for multiple rooms with the necessary cabling, though, this will obviously be more expensive and an amplifier may also be required.

Sky have told me that they are not allowed to put up my satellite dish due to their regulations, what can I do?

Sky have strict installation rules and if the proposed aerial position is too high or awkward to reach for example, they will not fit. But independent aerial installers will be able to do the install for you, though expect to pay a bit more than for a standard installation. This is a very common problem and you will find most aerial installers are familiar with fitting aerials for Sky television.

Cost of Replacing a Garage Roof

Cost of Replacing a Conservatory Roof