The Cost to Remove Mould in your Home

All you need to know about removing mould in your home including costs of materials, labour and time frames. 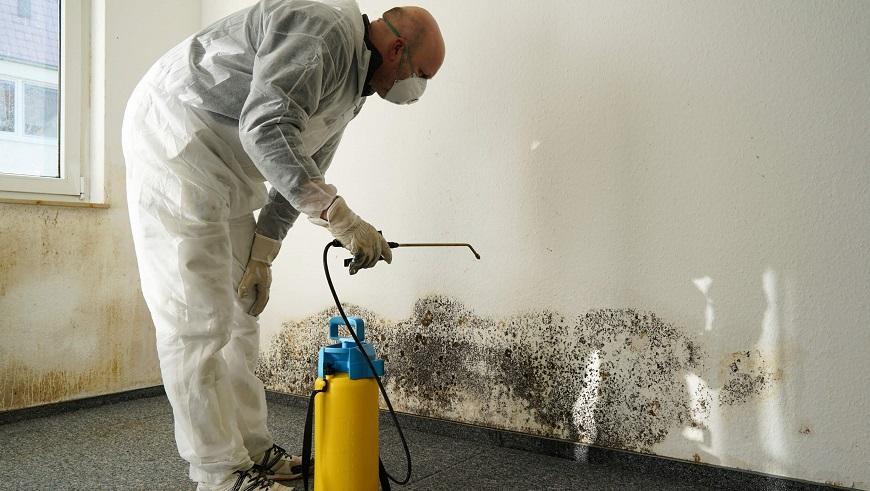 Damp and mould are caused by moisture in buildings, which is in turn most often caused by leaky pipes, broken or missing damp proof membrane (rising damp), or damage to roof/windows letting rain seep in. Excess moisture can also be caused by condensation which forms when the air can't hold any more moisture. Condensation problems are typically caused by cooking, showering, drying clothes indoors etc without adequate ventilation. The first step in removing mould is to remove the source of moisture in your home. Once the moisture source is removed, you may be able to remove the actual mould yourself, but for more serious cases, you will probably need to get a professional in to remove it safely and effectively.

You can remove a small amount of black mould yourself if it's confined to just a small area only (less than one metre squared). Remember to always protect yourself from mould spores by wearing goggles, gloves and a mask that covers both nose and mouth. Open the windows when cleaning mould but keep all internal doors closed to prevent spores spreading throughout the home. Dispose of any mouldy soft furnishings and clothes by sealing them in a plastic bag. You can use a rag dipped in the soapy water or a mild bleach solution to wipe mould directly off the wall. But be careful not to try and brush the mould off, as this can release mould spores into the air.

Once all traces of mould have been removed, use a dry rag or towel to dry the wall. Finally, all surfaces in the room should be thoroughly cleaned by wet wiping or vacuum to remove any mould spores. However, if you have a serious or recurring mould problem, or if you have health or respiratory problems that might be aggravated by exposure to mould spores, then you should call in an expert to have the mould removed quickly and safely.

A professional mould removal specialist can not only remove the mould effectively, they can also advise you on likely causes and how to prevent further mould problems in the future. The cost of clearing mould will vary depending on the area affected and the severity of the problem. Expect to pay anywhere from £50 to £250 to remove mould in a large room, up to £1000 to clean mould from an entire house. These prices do not include removing the source of the moisture, and are simply the costs for removing mould from the walls and ceilings.

The Cost to Remove Mould

The average material cost to remove mould will simply be included in the overall job price. The mould specialist will require materials such as, bleach, brushes and protective equipement.

The average mould removal specialist will usually charge around £150 to £200 for a full days work and usually a minimum of £50 just to come out. The duration of the work will depend on how severe the mould has become. Ultimately price will be affected by location and the size of the job.

Below are some estimated costs of hiring a mould specialist:

Moulds are a type of fungi which reproduces through its spores, which are light and readily carried through the air of your home. Moulds come in a variety of colours, but black is the most common.

What is black mould?

The most common types of black mould are Stachybotrys chartarum, Alternataria and Aspergillus niger. All are responsible for unsightly mould patches on damp walls.

Aspergillus is a very common group of moulds which can cause severe difficulties for people with existing respiratory conditions such as asthma, or for those with weak immune systems inckluding cancer sufferers.

What health problems does mould cause?

Inhalation of mould spores can cause a variety of symptoms including severe asthma attacks, sore Eyes, nose and throat irritation, coughing, wheezing and impaired lung function.

How to prevent condensation?

Try putting lids on saucepans when cooking, drying washing outside and avoiding using bottled gas heaters. Open windows every day make sure your home is well insulated and heated. If the condensation is a problem just in a particular room, consider adding an extractor fan or additional ventilation. In these uncertain economic times, many condensation problems are caused by people simply not heating their homes sufficiently in a bid to reduce fuel bills, this is a false economy as it will end up costing more in redecorating once mould starts spreading, not to mention the possible health implications and time off work.

How to Remove Mould from carpets, towels and furniture?

Removing mould from fabrics and soft furnishings is difficult. If the mould is bad, then you should probably throw away the items and buy new ones, especially if there are people in the house who suffer from respiratory problems such as asthma. You can try drying the items thoroughly then brushing off the mould outside, making sure your mouth and nose are covered. Plus you can try using a light bleach solution to gently clean the fabric then drying and finally using a vacuum.

What is causing mould in my home?

Every home is different, but the most common cause of mould is damp from condensation. Black mould is most commonly found in bathrooms, around windows and behind furniture - all areas which are typical spots for condensation. Anti-mildew paint can be used after the mould has been removed to discourage future mould growth, but this cannot prevent the build-up of condensation. There is really only one way to stop mould from coming back, and that is to find the cause and fix it. The simplest way to do this is to ensure that there is no damp in your home. Use extractor fans in wet areas such as the kitchen and bathroom, avoid drying clothes indoors if you can, and open the windows to air the house whenever possible. If you struggle to keep your home dry, buying a dehumidifier can be a great investment, with small models available for less than £100, which is a lot cheaper than the frequent redecorating which is required with mould growth!

Should I tackle the mould DIY or hire a specialist?

If you hire a professional to deal with your mould problem, then they can give you specific advice about eliminating damp and preventing the return of the problem. A reliable and knowledgeable contractor can really be worth their weight in gold when it comes to tackling mould problems!

The Installation Cost of Loft Insulation

The Cost to Remove Mould in your Home

The Cost Of Surveying For Damp In Your Property